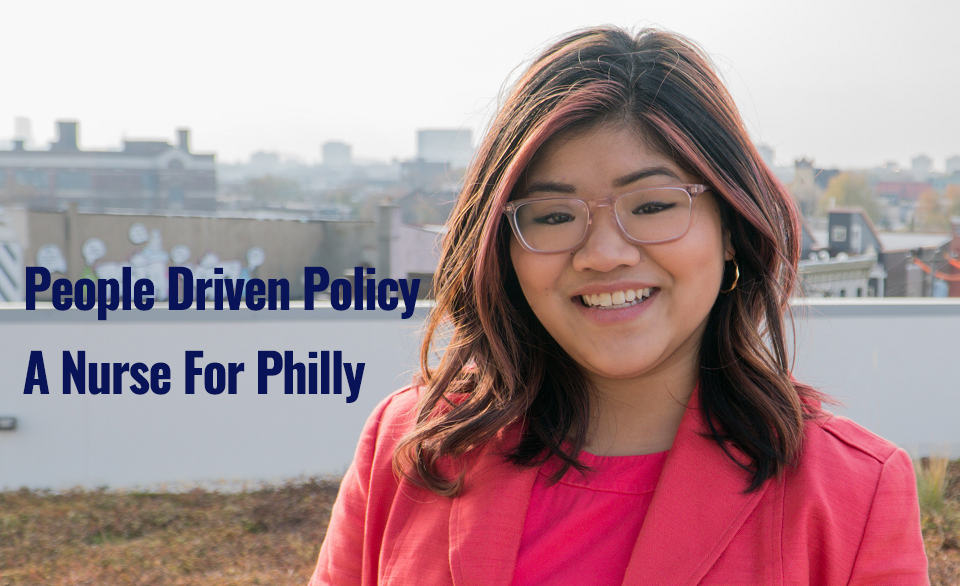 Joanne Mantilla is a nurse in Philly who currently resides in Kensington. Her parents emigrated from the Philippines to America in the 1980s where they lived in New York City and Queens before moving to Jersey City, NJ where Joanne was born. Joanne's upbringing was influenced by the same cycles of drugs, violence, and income inequality experienced in many inner cities.

After moving to the suburbs of New Jersey, Joanne's parents worked and fought hard to give their children opportunities in America. She moved to Philadelphia to attend Penn Nursing in 2010, where she eventually earned both her Bachelor's and Master's degrees. She has served as a leader to her classmates all throughout her educational career, ultimately bringing her love of community to a life-changing experience as the organizer for Penn Nursing's Graduate Student Organization's West Philadelphia Health Fair in 2018.

Everything that has transpired since 2016 has activated Joanne politically. The rhetoric that has divided our country is unacceptable and does not represent the America she grew up believing in. We need leaders who represent its people, leaders who will listen to what their constituents are truly asking for, leaders who have lived the same tough experiences that tear us down, hold us back, or build us up. And so, Joanne is running to represent Pennsylvania's 2nd district. Running for Congress will not be an easy journey, but she knows, wholeheartedly, she has the voice to advocate for this district.

Our current representative is not a bad person, but he does not represent what the district needs. We need a candidate who understands how the social and economic systems impact the lives of our constituents. It is unacceptable that parts of our district have a poverty rate greater than 50%, while the next neighborhood sees great economic investment and opportunity. We need someone who is not afraid to talk about structural racism, classicism, and it's impact on our communities today. We need a candidate who is not afraid to break down barriers to promote diversity. We need Joanne.

2016 was a wake-up call for Joanne. Suddenly, political leaders seemed to have no interest in doing what needed to be done to prepare America for the future and to protect it's people from an economic system that is rapidly promoting inequality. Above all, she began to see how the weaknesses in our economic and social systems were taking their toll on the mental, physical and emotional health of her patient's in the hospital.

Joanne wants to make a difference in the lives of the communities around her. She is ready to be a leader in modernizing healthcare in this country. She is ready to help protect hard-working families. She is ready to fight for the most vulnerable people in our society to be treated with dignity and respect. Joanne wants this district to thrive – not just survive. We must elect representatives who understand what Americans struggle with on a daily basis. We need to elect people like Joanne.

The leadership of this country does not reflect the values and needs of the people most struggling to survive. Many political leaders are supported by big money corporations and lobbying groups; in exchange, those leaders put the interest of their financial backers ahead of their constituents. Joanne will fight to represent the individuals whose voices and stories get drowned out, the people who are asked year after year to turn out the vote, but are not given policies for the future we deserve.

We need a voice. Someone who looks like us, sounds like us, has lived like us. We need someone who not only listens, but is ready to put in the time and effort to figure out how to get across that finish line. Joanne is not just someone who says the right things, who speaks in empty promises made by leadership in either political party. She is a leader in her own right, someone who wants to make plans with a road map to back them up. She is here to take the stories and lived experiences of real people all the way to Congress.

Follow my journey on this campaign.
Nothing held back.

Wherever you get your podcasts.

Support the Nuts and Bolts of our Outreach!

Whoa. Nope. We here - but we're not here to buy convenience.
I am not accepting donations from corporations.
We're doing this grassroots-style.

If you believe in me and what we're fighting for - please donate!
Every single donation, from $1 to $25, helps to cover the costs of getting the word out there and, more importantly, the vote!

Check out this cool FEC.gov website to see how much a candidate raises and on what they spend their campaign funds.

....and who/where they get their donations from.